Coronavirus lockdown: How one couple coped with confinement in Italy

Italians have been Europe's pioneers when it comes to coronavirus lockdowns. So what can the French and Spanish learn from their experience?

Maryna Manchenko, who lives in the Sicilian capital Palermo, has been on lockdown for more than a week and has been keeping a diary.

Manchenko, Born and raised in Kyiv, Ukraine, lives with her boyfriend and they both work for the same NGO.

"We ended up locked in the same apartment, with two identical laptops, tons of tasks and no real work space organisation," Maryna recalls, describing how they found themselves when the lockdown came into effect.

Maryna has been sharing her experience with Euronews.

"On Monday, 9 March, we left our office around lunch time knowing that we were not coming back. We would be working from home until further notice – something expected for a while now, as the situation with the spread of the virus was getting continuously worse. Isolating ourselves at home seemed like a reasonable idea as there are so many people who cannot do that due to the nature of their work. Since we can, it felt like it was our duty.

"That afternoon we shared the same working space - the couch - putting our laptops on the coffee table. This was not the most productive time, as we were distracted by each other and also fresh to these new working circumstances, but we managed our tasks.

"It was raining outside and our pantry seems to be fully stocked, so we didn’t really feel the need to go out.

"Our colleagues, however, were sending us pictures of the queues outside our local supermarket. According to the new decree, it was prohibited to have more than a certain number of people within an enclosed space, so customers were asked to wait outside for the previous visitors to leave the building.

"The lines looked very organised - the supermarket’s staff were actually making sure that people were keeping the obligatory one-metre distance apart.

"Later we discovered - when getting our groceries the previous day, we’d forgotten to buy two essentials – wine and chocolate. Don’t repeat our mistakes! Eventually we were considering taking a 30-minute walk to get to a 24-hour supermarket for them.

"The next morning, I woke up to the videos of a huge line of people, who’d spent their night queuing in the rain to try and get into the same shop.

"We decided to divide our apartment into “offices”. My boyfriend wrote the name of his department on a yellow post-it and put it on the kitchen door.

"'See you for the 11 am coffee break,' he said and closed the door.

"This way our productivity increased.

"Around 11 we made coffee and had a group chat call with our friends from work. During the next couple of days, this will become a very nice tradition. This will really help us to keep our optimism.

"From our terrace I could see the nearest coffee place. It was still full of life – people were taking coffees, exchanging kisses and news, as if nothing really happened.

"Knowing that the restaurants and bars are supposed to be closed at 18 h I wondered if people keeping a schedule like this helped when there’s an epidemic to be stopped?

Wednesday - I can run but can I walk? Confusion over stricter measures

"On the third day, I started googling cheap options for a desk. Our home was set up for small dinner parties and Netflix, not accommodating two people trying to work eight-hour days.

"We also start doing yoga, in order to stretch our muscles and do some sort of exercise.

"A new decree was announced at the end of the day. It obliged all of the retail stores, bars, restaurants and even open markets to close.

"Everyone was debating an area of great confusion – were people still allowed to go out for short walks?

"According to the decree it seemed like it was both allowed, but not recommended, and strictly prohibited with fines for those who will be seen on the streets without a justification. At the same time running was still permitted as long as people did it on their own.

"The whole of Italy, it seemed, was reflecting upon the thin line between walking and running. Every new explanation, provided by the government later on, made us feel even more confused.

My city as never seen before

"When I finally got out to buy some fruits, I saw Palermo as I’d never seen it before – absolutely empty. Mornings, afternoons and evenings started looking exactly the same - there was almost no one on the streets. The few people who I met were either carrying enormous shopping bags from the supermarkets or walking their dogs.

"I was joking with my partner that he’d shown a lack of strategic planning, by refusing to have a pet. Having a dog all of a sudden is a luxury, a perfect alibi. If you have one, you can be seen on the street at any time of the day or night with the best explanation: 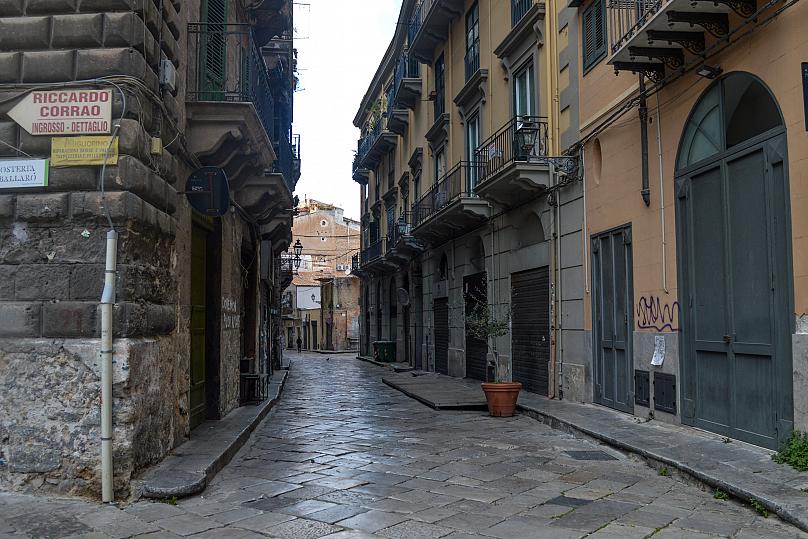 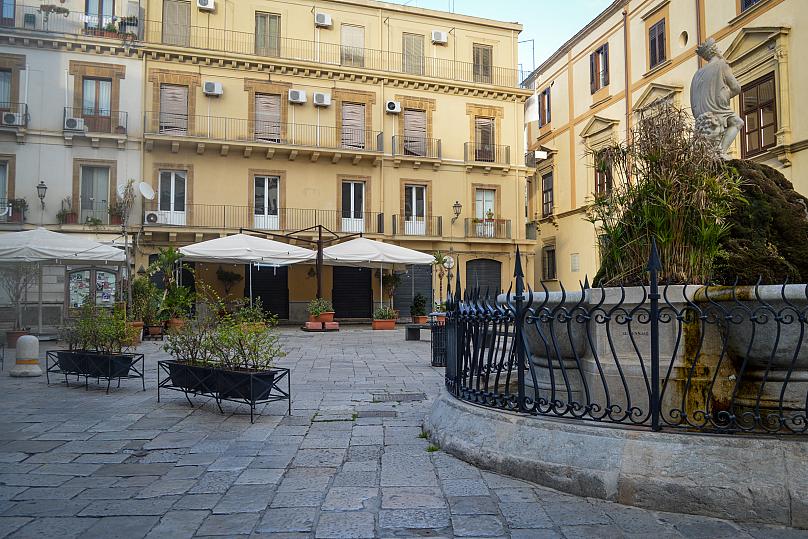 "On the fourth day, when I’m ready to hit the 'order' button for the desk, I noticed that the expected delivery date was April 14 - 11 days after the planned end of the quarantine. Even though none of us believes that the lockdown will actually end in the beginning of April, I decided not to order yet.

"Our routine was pretty much set in stone by this point.

"We have breakfast and hide in our 'offices'. At around 11 we have our first coffee break and group call with friends to complain about the lack of fresh air, lunches and aperitif together, exchanging the fears over the new tragic statistics. Then two more hours of work and we proceed to cooking and enjoying our lunch.

"In the afternoon we have one more coffee break at around 16 h.

"I gathered all of my courage to take the basket and go to the supermarket. To my surprise, the line to it moved along quite fast, and after 10 minutes I was inside. One of the employees makes me put on a pair of the single-use gloves – the ones they normally offer for putting fresh bread into bags. The supermarket was fully stocked. An elderly lady started to speak to me next to the fridge with fresh pasta. I could see that she literally had no one to talk to during these last days and she was desperate for some company.

"After exchanging a few thoughts about how good truffle pasta can be with some ragù sauce, she switched her attention to another lady, while I left the supermarket with two bags of groceries worrying about elderly people, who are also the most vulnerable to the virus.

"At 18 h we went out on the terrace to witness the national flash mob – all over Italy people were playing music and singing from the balconies to raise the spirit of the country. Our colleagues are sending us videos of their neighbourhoods – their neighbours even used pans and pots to produce at least some sort of a melody.

"Our neighbours on the right were playing violin and djembe drums, but gave up after some time, as no one else was playing the actual instruments. Then the neighbours on the left put the speaker on their window playing 'All you need is love'. That moment the street lights also switched on and the city started feeling a little bit less deserted.

"Our first weekend in quarantine arrived. We had so many to-dos and ended up doing nothing, apart from having a nice breakfast and watching Netflix.

"At around 12:00 the whole country went out to their balconies again – this time to applaud all of the medics who are saving lives while risking their own, and especially those who died from the complications while performing their duties.

"We all clap together, with the neighbours on the right and the neighbours on the left. Our colleague is writing to us: ‘There is an older lady on the balcony in front of me - she is not clapping, but blessing us all’. And, I realise, I’m becoming way too sensitive during this quarantine, but it’s very hard to hold back the tears in this moment.

"On the seventh day I decided that our small weekend traditions are even more important during these tough times so made crepes for breakfast. I also finally ordered myself a desk from another website, went to the supermarket and made a plan for the week as the day after I would be heading back to my couch office.

"At 18 h we went out on the terrace again – the neighbours on the right are taking the new tradition very seriously, so we all sing and dance together, the whole neighbourhood.

"The times are sad and a little scary, as no one can tell us when the quarantine will end. But they also give an opportunity to be more creative than ever in meeting your neighbours, appreciating small things in life and staying optimistic.

"Adrà tutto bene, as many people have written on their balconies these days. Everything will be fine."

Crush of American travelers from Europe at O'Hare

How the new coronavirus could change our behaviour

We&rsquo;ve all experienced it during these times of the coronavirus pandemic: the accidental handshake, hugging our friends or cheek kisses as greetings. You know you shouldn&rsquo;t, and yet, it...
16 / March / 2020

As the coronavirus pandemic keeps progressing, an increasing number of people have raised medical questions about the COVID-19. Its true fatality rate isn't yet known, but it experts believe it's...
16 / March / 2020

COVID-19: Why are we panic buying?

With people increasingly concerned about how the outbreak will develop, we're seeing more and more cases of panic buying - even as governments reassure their citizens that they don't need to...
17 / March / 2020

Several cases of bird flu have been reported in India, prompting authorities to order the culling of poultry. Kerala's government said it had deployed special squads to cull all poultry within a...
17 / March / 2020

Tests on an experimental vaccine to protect against the new coronavirus have begun in the United States, the first of many efforts around the world to create a vaccine as cases continue to...
17 / March / 2020

President Emmanuel Macron criticised French people who had not taken restrictions on movement seriously and announced a range of further public health measures to stop the spread of COVID-19. In a...
18 / March / 2020

UPDATE: There are now two confirmed cases of the novel coronavirus in Glendale, according to a report released on Monday afternoon by the Los Angeles County Department of Public Health. There are...
Latest news