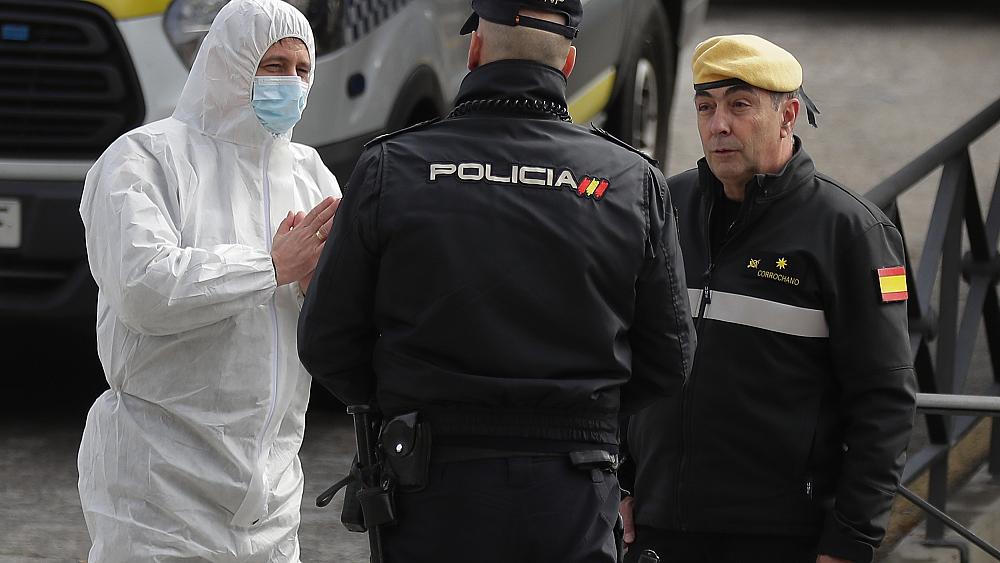 The COVID-19 pandemic has "sparked new crime trends", the head of Interpol told Euronews on Monday, warning that organised crime groups have adapted their activities to benefit from the global health crisis.

There is currently no vaccine against the novel coronavirus and experts from the World Health Organisation (WHO) predict it it "still 12 to 18 months away".

The WHO has also stressed that more research is needed to conclusively determine whether certain drugs — including anti-malaria medicine — can fight off the deadly virus as advanced by some doctors around the world.

The head of Interpol also flagged that other tactics used by organised crime groups include "criminal call centres".

"We have this new form of telephone fraud," he said, whereby "people are receiving telephone calls from somebody who is pretending that they are hospital officials.

Watch Euronews' interview with Interpol's Jurgen Stock in the player above.

Cybercriminals also use the pandemic to spread malware by also claiming to be health officials and encouraging people to open attachments.

Last week, Interpol announced that 121 arrests had been made worldwide in a vast operation against the illicit online sales of medicines and medical products.

By mid-March, telephone fraud and phishing campaigns had already resulted in monetary losses "as high as hundreds of thousands of dollars in a single case," the law enforcement agency also revealed.

"To date, Interpol has assisted with some 30 COVID-19 related fraud scam cases with links to Asia and Europe, leading to the blocking of 18 bank accounts and freezing of more than USD 730,000 (€661,000) in suspected fraudulent transactions," it said in a statement at the time.

Where Do The Richest Americans Live?

China is willing to resolve its trade dispute with the United States through "calm" negotiations and resolutely opposes the escalation of the conflict, Vice Premier Liu He, who has been leading the...
24 / February / 2020

The US reiterated its stance that Iran was behind Sunday's attacks on Saudi Arabian crude oil facilities, despite a claim from Houthi rebels that they launched the attack from Yemen. The strikes...
24 / February / 2020

5G and SMEs: the keys to digital transformation at ITU Telecom World in Budapest

ITU Telecom World 2019 brings governments, industry and entrepreneurs together in Budapest, Hungary. This year's topic is the importance of global collaboration in the telecom world, or "Innovating...
29 / February / 2020

The Protocols Were Wrong to Begin With

BY ARA KHACHATOURIAN President Serzh Sarkisian&rsquo;s announcement Thursday declaring the Turkey-Armenia Protocols null and void is not cause for celebration, but rather yet another opportunity to...
29 / February / 2020

Sumgait Pogrom Plotters Have Not Been Punished, Says Nalbandian

GENEVA&mdash;Armenia&rsquo;s Foreign Minister Edward Nalbandian, in remarks delivered Tuesday at the 37th Session of the UN Human Rights Council, said that those who plotted the savage Sumgait...
29 / February / 2020

U.S. permanent representative at UN, Ambassador Nikki Haley said Washington is ramping up the pressure on the North Korean regime. &ldquo;The U.S. Mission to the UN submitted today a list of...
29 / February / 2020

Thirty years after the Karabakh conflict, it is time for the EU to turn its attention back to Nagorno-Karabakh and do better in acknowledging the territory, Diogo Pinto, Director of European...
29 / February / 2020

YEREVAN. &ndash; A delegation from the Committee on Foreign Affairs of the Russian Council of the Federation paid a visit to the Armenian Genocide Memorial in Yerevan, the capital city of Armenia.
27 / February / 2020

The ANCA-San Fernando Valley West Chapter has organized a one day conference in honor of the 30th anniversary of the Artsakh Liberation Struggle to recap the history and demand of its people to...
28 / February / 2020

Former United States Senator Mark Kirk, whom the visiting Armenian parliamentary delegation on Friday awarded with the Medal of Honor of the National Assembly of Armenia, in Washington, D.C., began...
28 / February / 2020

Slogan of La Francophonie Summit in Yerevan is &ldquo;Living Together&rdquo;

Armenian Caucus Co-Chair Frank Pallone honored memory of the victims of Sumgait pogroms on the House Floor on Wednesday. &ldquo;Mr. Speaker, I rise today to commemorate the 30th Anniversary of the...
28 / February / 2020

US journalist speaks about Bush's position on Armenian Genocide

Fresno State journalism professor, retired executive editor of The Fresno Bee, Jim Boren spoke about his meeting with former US President George W. Bush, The collegian reported. In his address to...
15 / March / 2020

Six years ago globalisation and development expert Ian Goldin predicted that the next economic crash would be caused by a pandemic. Mr Goldin told Hardtalk's Zeinab Badawi that the economic effects...
Latest news