Los Angeles stands with Armenia and the people of Artsakh.

Congressman Adam Schiff wrote about this on his Facebook page.

Los Angeles stands with Armenia and the people of Artsakh. 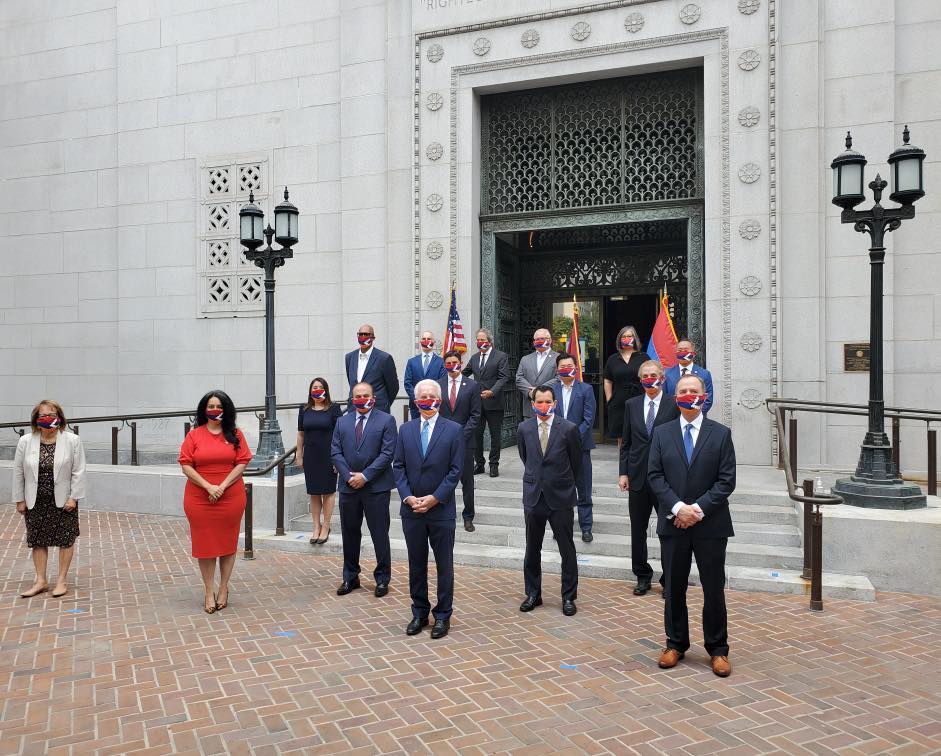 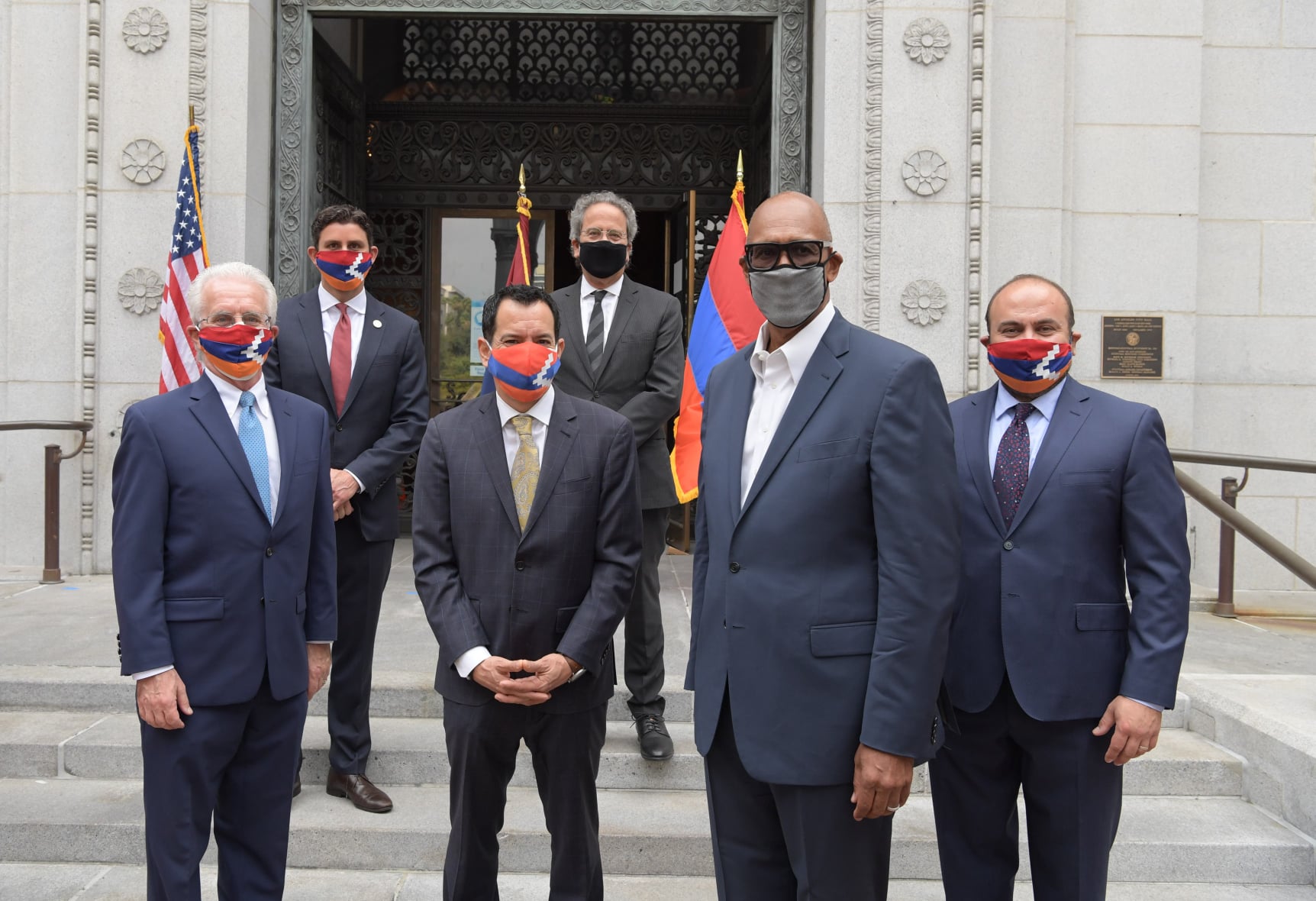 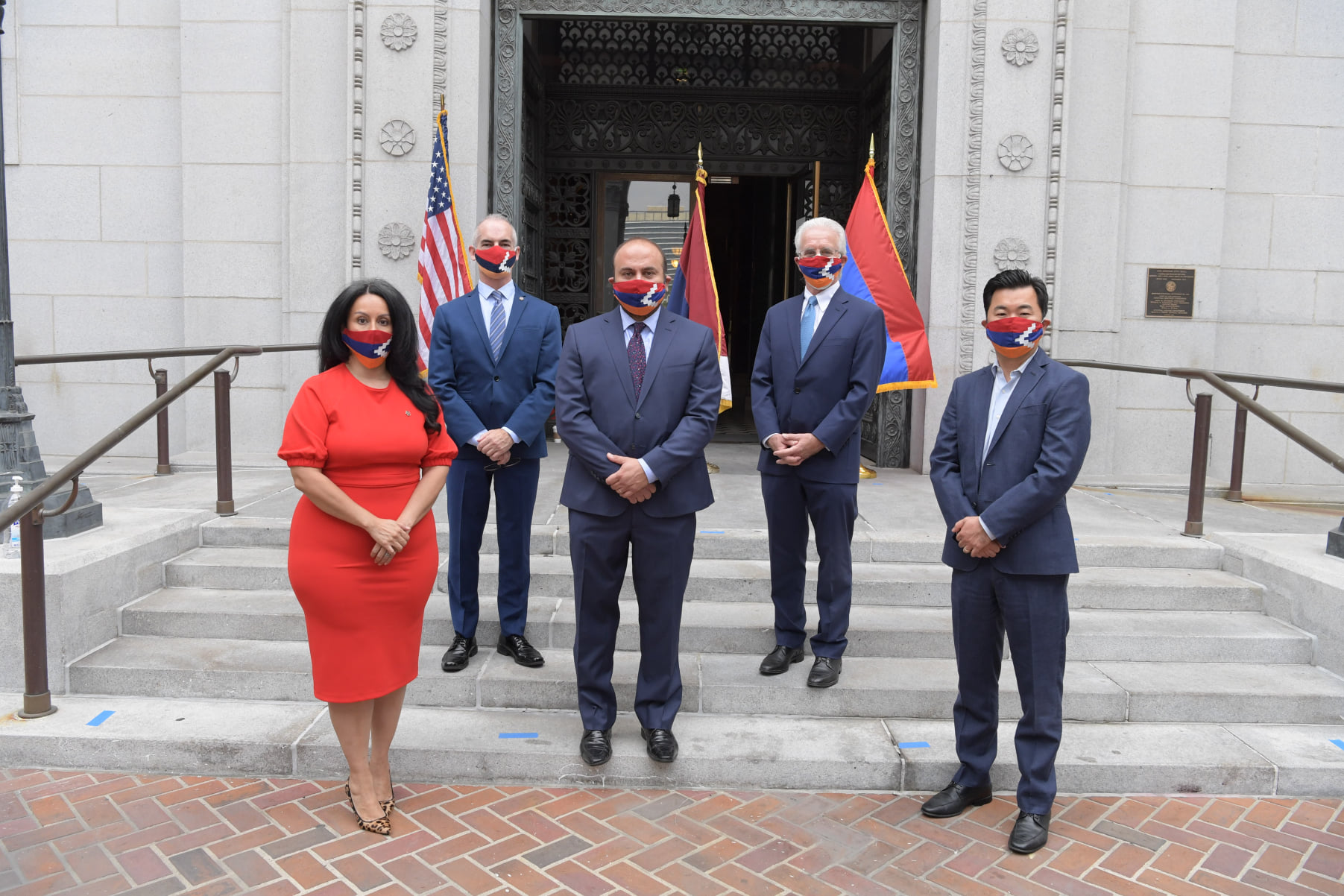 Rep. Adam Schiff had strong words for Turkey, which has intervened and is helping Azerbaijan after it launched a military attack on Sept. 27 in the autonomous enclave of Nagorno-Karabakh, also called Artsakh — a mountainous region bordering Armenia and Azerbaijan.

“We have a strong bipartisan message for Turkey and Erdogan: You’re a member of NATO. Start acting like one,” Schiff said during the press conference. “And we have a message for Azerbaijan: Cease the hostilities or there will be consequences.”

The condemnation follows the biggest escalation in a decades-old conflict over the autonomy of the region, which is home to about 150,000 people — about 95% of whom are ethnic Armenians, according to a 2015 census. And across L.A. in recent days, cars flying the Armenian flag and bearing messages of support for Artsakh could be seen driving on streets and freeways.

Los Angeles, home to the largest Armenian population outside of the country itself, has seen several demonstrations over the last week, with thousands of Armenian Americans and their allies calling for international intervention in the conflict.

Over the weekend, thousands of protesters came together, gathering outside the buildings of news outlets in Hollywood, including CNN and KTLA, in an emotional call for media coverage and recognition of the escalating violence in the region. Demonstrators carrying Armenian flags also walked onto freeways, blocking traffic as a form of protest and a plea for a stop to bloodshed in the region.

The Armenian American community in L.A. has decried the escalating violence as a massacre against Armenians and is calling for international intervention.

“For our Armenian brothers and sisters, nothing can truly ease the pain and the worry that you’re feeling right now, the echoes of history,” Mayor of L.A. Eric Garcetti said. “Lives have been lost to acts of unnecessary violence and unwarranted assaults on innocent families in an invasion of Artsakh’s cities and communities.”

The mayor said L.A. will use its status as a “global crossroads” to facilitate international dialogue and to call for immediate peace. He called on the Trump administration to conduct the diplomacy necessary to bring peace to the region by denouncing Azerbaijan’s actions and by calling for Turkey to disengage from the conflict.

O’Brien “heard and acknowledged” Pashinyan’s concerns and promised to set up a phone conversation between the Armenian prime minister and Trump, the Times reported.

In the meantime, Schiff and Rep. Jackie Speier of San Mateo proposed Resolution 1165, calling for the U.S. to condemn Azerbaijan’s military operation in Nagorno-Karabakh and to denounce Turkish interference in the conflict.

Nazarian called for the federal government to “step up” and he equated the current violence to that of the Armenian Genocide of 1915, saying, “If we really mean what we say by saying, ‘Never again,’ this this is the time to act.”

Amid widespread demonstrations in L.A. over the weekend, the consul general for Azerbaijan in L.A. released a video-recorded statement saying, “peace can only be achieved when Armenia leaves the occupied regions.”

Some worry that the clashes can escalate to a proxy war between Russian, Turkey and Iran if other nations, particularly the U.S., do not act soon.

On Monday, Armenia accused Azerbaijan of firing missiles into Stepankert, the capital of Nagorno-Karabakh, while Azerbaijan said several of its towns and its second-largest city were attacked.

About 220 servicemen have died in Nagorno-Karabakh since the clashes began last week and 21 civilians have been killed with 82 others were wounded, according to Nagorno-Karabakh officials and state-run Armenian Unified Infocenter.

Azerbaijani officials have not given details about their military casualties but have said 25 civilians were killed and 127 were wounded.

Shavo Odadjian and John Dolmayan this past weekend at the charity benefit to stand with Armenia...

Thank you to everyone that joined Shavo Odadjian and John Dolmayan this past weekend at the charity benefit to stand with Armenia and honor our fallen soldiers. For those who are interested in...
11 / October / 2020

Doctor, Vahe Meliksetyan, Who volunteered to join the frontlines in order to help save the lives...

REMEMBER their faces..Doctor, Vahe Meliksetyan, Who volunteered to join the frontlines in order to help save the lives of injured army members dies Providing First Aid to Armenian Soldiers on the...
10 / October / 2020

We also discussed Azerbaijan&rsquo;s deliberate bombing of a historic Armenian Church, the...

This morning I spoke to Ambassador Varuzhan Nersesyan, Armenia&rsquo;s representative to the United States, about the continuing conflict in Artsakh. We discussed Azerbaijan&rsquo;s ongoing...
10 / October / 2020

We also discussed Azerbaijan&rsquo;s deliberate bombing of a historic Armenian Church, the...

This morning I spoke to Ambassador Varuzhan Nersesyan, Armenia&rsquo;s representative to the United States, about the continuing conflict in Artsakh. We discussed Azerbaijan&rsquo;s ongoing...
15 / October / 2020

Why Do People complain about Gov. Gavin Newsom's Adult Health Day Care and the decision to close...

Most of Adult live at home with a family member or close friend and caregiver. They arrive by family car, by bus or a Paratransit bus. They all have cognitive or physical disabilities that would...
19 / October / 2020