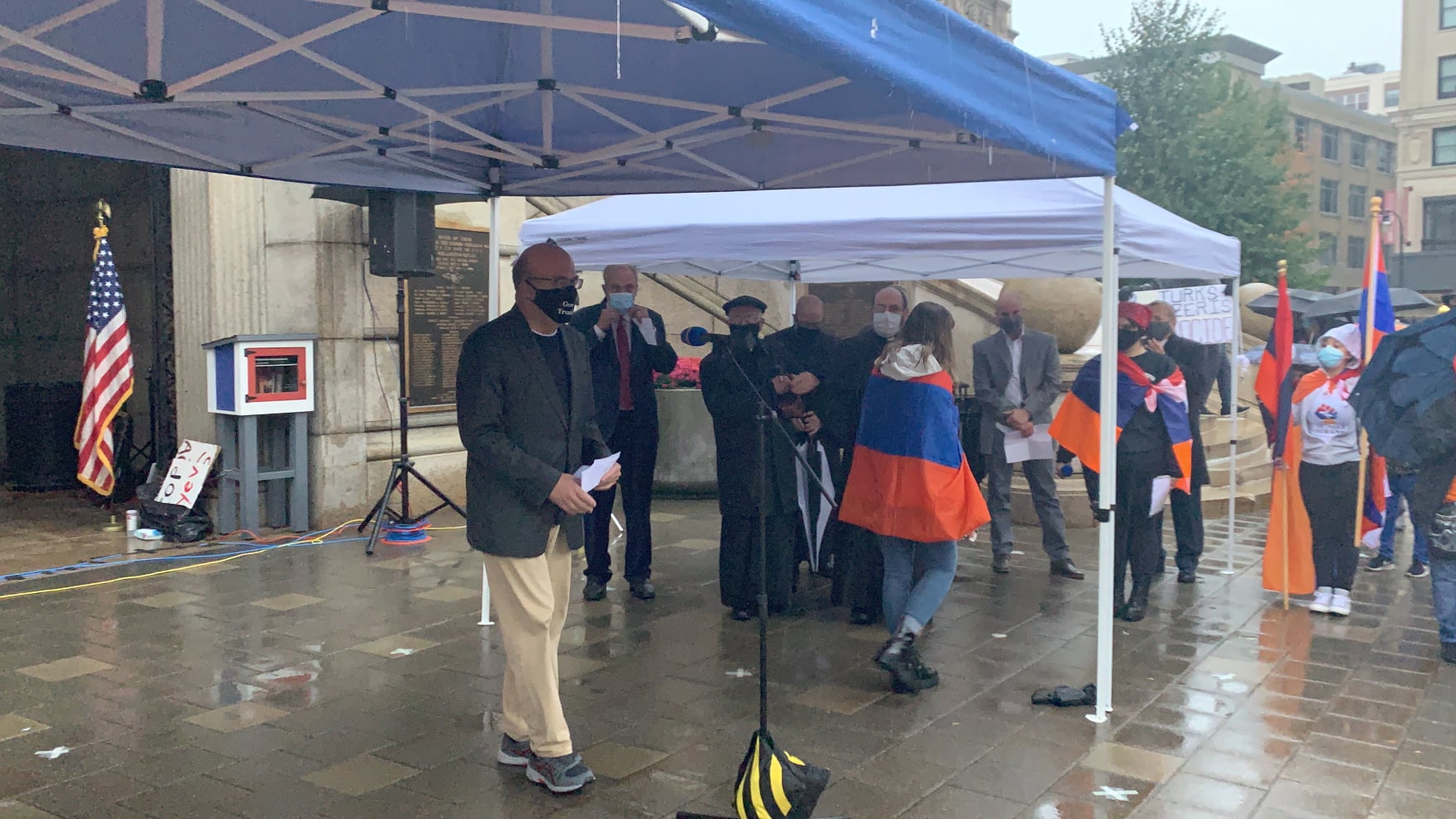 WORCESTER, Mass.—In a powerful speech delivered to hundreds of his constituents gathered in downtown Worcester, Massachusetts on Friday evening during a driving rainstorm to raise awareness of the military aggression of Azerbaijan and Turkey, Congressman Jim McGovern proudly declared that the United States should formally recognize Artsakh as an independent nation. The gathering in support of Artsakh, held on October 16, 2020, was organized by the local Worcester AYF and ARF Chapters and attended by constituents who live in the 2nd Congressional District of Massachusetts, which has been represented by Congressman McGovern since he was first elected in 1996.

The full remarks delivered by Congressman McGovern are provided below – including his comment that – “We must impose individual sanctions on the leaders of Turkey and Azerbaijan, freeze all their assets in U.S. banks and financial institutions and declare Artsakh an independent nation once and for all.”

The ANCA has led an aggressive national campaign, securing over one million messages to Capitol Hill encouraging Congress to enact crippling sanctions on Turkey and Azerbaijan for committing war crimes – as outlined in the Global Magnitsky Human Rights Accountability Act that became law in 2016.

“As always, our community is proud of Congressman McGovern who has always stood on the side of justice,” remarked George Aghjayan, chairman of the Armenian National Committee (ANC) of Central Massachusetts. “Congressman McGovern calling for the US to recognize the independent Republic of Artsakh is both timely, prudent, and just. On behalf of the thousands of Armenian Americans who call his congressional district home – we thank Congressman McGovern for his leadership on this human rights issue,” added Aghjayan.

Nearly 100 Congressional members have made statements condemning the attacks and now the ANCA urges that members take the next step – following Congressman McGovern’s lead – in calling for recognition of Artsakh and sanctions on both Turkey and Azerbaijan.

Remarks of Congressman Jim McGovern (D-MA) at the Rally for Artsakh held on October 16, 2020 and organized by the Worcester, MA chapters of the AYF and ARF.

My good friend, the late civil rights leader, Congressman John Lewis, he used to always say, when you see something wrong, make it right, when you see injustice, take a stand, and fight for justice. He used to call it good trouble, that is why I am wearing this mask, in honor of him. Good people, not just within the Armenian community, but good people all around the world, who care about your rights – ought to be part of this fight for justice for the Armenian people that are in Artsakh.

And if Turkey and Azerbaijan continue to ignore the ceasefire, continue to target cities and towns, continue to bomb innocent civilians, then the United States of America must cut off all military aid to Azerbaijan. We must stop all sales of military equipment and arms to Turkey. We must impose individual sanctions on the leaders of Turkey and Azerbaijan. Freeze all their assets in US banks and financial institutions, and declare Artsakh an independent nation once and for all. Today and every day, like you, I stand with the people of Artsakh. I stand with you and we all stand together for the free and independent people of Artsakh.

And one final thing, and we need to make sure this message gets heard loud and clear in the current administration in Washington. If the United States stands for anything it should stand out loud and foursquare for human rights. We cannot be silent in the face of what is happening in Artsakh. We have to take a stand, we have to be clear, and we have to fight for peace and justice in human rights in Artsakh and in the world. Thank you.

Congressman Jim McGovern, has long been a great friend of the ANC of Central Massachusetts and received an A+ rating from the ANCA in 2018 for being a champion for his Armenian American constituents. Last year, Congressman McGovern was awarded the coveted ANCA Eastern Region Freedom Award at the organization’s 13th annual banquet held in Lowell, Massachusetts.

On April 10, Turkey&rsquo;s President Recep Tayyip Erdogan sent a letter to Boris Johnson, prime minister of the United Kingdom, informing him that Turkey &ldquo;would like to welcome you in our...
05 / June / 2020

Why Do People complain about Gov. Gavin Newsom's Adult Health Day Care and the decision to close...

Most of Adult live at home with a family member or close friend and caregiver. They arrive by family car, by bus or a Paratransit bus. They all have cognitive or physical disabilities that would...
05 / June / 2020

Nursing home placement caused by the defunding of the Adult Day Health Care and Multipurpose...

''The program is very useful. This is really our hope, to countless other family caregivers that...

The Adult Services provides medical care, social work, and recreation, all in one place, for tens of thousands of senior citizens and young disabled adults. But under Gov. Newsom&rsquo;s proposed...
10 / June / 2020

The covid pandemia and impact on cancer care

Germany's virus response won plaudits. But protests over vaccines and masks show it's a victim of...

It was a woman with blonde dreadlocks who capped off one of the biggest anti-coronavirus demonstrations in Europe on Saturday, which saw tens of thousands of anti-vaxxers, conspiracy theorists and...
05 / September / 2020

Lionel Messi says he will "continue" at Barcelona, despite wanting to go "all year," the six-time Ballon d'Or winner announced in an exclusive interview with Goal.com on Friday. The 33-year-old's...
07 / September / 2020

Pamela Anderson is dating her bodyguard

Pamela Anderson has moved on from her 12-day marriage to Jon Peters, Page Six has learned. It was told that the 53-year-old actress has fallen for her security guard&mdash;and pals say it&rsquo;s...
27 / July / 2020

A woman in Virginia was delighted when a large black bear decided to take a nap in a kiddie pool she had in her backyard.Regina Keller, no stranger to bears, has been taking pictures of the...
16 / September / 2020

Kim Kardashian West, who has one of the biggest Instagram followings in the world, said Tuesday that she would be joining other high-profile users in a protest against Instagram's parent company...
16 / September / 2020

President Donald Trump faced life outside his own political bubble on Tuesday, where his self-congratulation, buck passing and audacious falsehoods conspicuously failed to meet the moment when he...
Latest news