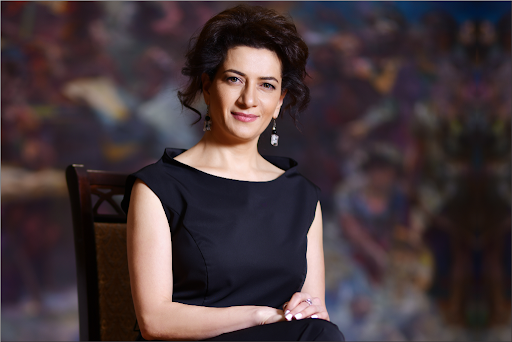 I have sent this letter to my dear friend and First Lady of Brasil Michelle Bolsonaro. I understand my request is not an easy one to implement. On the contrary, enormous willpower, courage, and determination to stand on the side of justice is needed for this.
While the friendly nation and government of Brasil analyze the situation, I now adress to all First Ladies, in particular those that I have known in person;

Do you recall our conversation about peace and the role that women in general and us First Ladies in particular can have in bringing and strengthening peace in our societies and the world?
For more than 10 days now, my nation is resisting a war that has been waged against us. On September 27, Azerbaijan’s dictator Ilham Aliyev and Turkey’s dictator Recep Tayyip Erdogan launched a war against Nagorno-Karabakh, a republic that declared its independence 30 years ago and still awaits international recognition of this independence.

This war is not only against the Armenians of Nagorno-Karabakh, but also against all Armenian people in general, as Turkey’s Erdogan aspires to continue the annihilation of my people, that the Ottoman Empire started a hundred years ago with the Armenian Genocide.
Cities and towns are being bombed. Forbidden weapons are being used against civilians. We already have hundreds of victims – soldiers, civilians, and children.

My nation cannot resist this catastrophe alone. We need our friends, and I am turning to you with my most cherished desire –Your country’s recognition of the Nagorno-Karabakh Republic.
I assure that your country’s recognition of the Nagorno-Karabakh Republic will bring peace to all nations of this region, including that of Azerbaijan, whose young men are dying alongside our young men in the battlefield.

My dearest First Lady,
I want you to recall our conversation, I want you to recall my eyes. I must look with those eyes into the eyes of the mothers of the fallen soldiers and explain why their sons are no longer with them. Only peace can justify their sacrifice.

I want you to know that, as I am writing this letter, my son, my beloved Ashot is on his way /October 8/ to the frontline with fellow soldiers .

I want you to know that my son’s life is also at stake for peace to prevail.
Today your country can do more recognizing the independence of the Nagorno-Karabakh Republic. Becoming the first nation to do this, your country will act as the dove of peace preventing more bloodshed in our region and restoring and strengthening humanity’s faith in itself and in God’s might.
I will forever be grateful to you and your nation, the Armenian people will forever remember this, all of humanity will acknowledge this step because today we are at the frontline of preserving civilization.
I want you to know that every minute, every hour is vital, and let the divine power act through your hands.

With love and hope,
Anna

Our gunners, as always, shine with literacy

The Armenian army is provided with the necessary clothes, food, vehicles and equipment

Hayk Markosyan wrote about this on his Facebook page. To all who care about the current situation in Armenia living in the United States: We, the Armenian community, here and in the motherland are...
30 / September / 2020

Dear Armenians The website of the Foundation has been completely restored. Continue to transfer money to the fund. https://www.himnadram.org/en
01 / October / 2020

In the early morning of September 27, the Azerbaijani military launched a massive attack on Nagorno Karabakh along the entire line of contact using air force, missiles and tanks. The Azerbaijani...
02 / October / 2020

Shushan Stepanyan wrote about this on her Facebook page. At around 07:55, air defense units of the Armenian forces shot down one enemy aircraft and one drone in the north-eastern direction of...
02 / October / 2020

Photos from Stepanakert after the attacks of Azerbaijanis

Today (On October 2), Azerbaijan shelled the City of Hadrut in Artsakh with two Smerch rockets. As a result of the shelling by cluster munition, the civilian population was harmed. The news is...
06 / October / 2020

Statement from Minister Champagne on suspension of export permits to Turkey

The Honourable Fran&ccedil;ois-Philippe Champagne, Minister of Foreign Affairs today issued the following statement: &ldquo;Over the last several days, certain allegations have been made regarding...
06 / October / 2020

Iranian Minister of Defense Brigadier-General Amir Hatami said on Tuesday that Iran attaches special significance to the security of its citizens and border residents, warning the two states...
Latest news